“The heart and mind are the true lens of the camera” Yousuf Karsh once said, and his words perfectly describe the working principle of Amberly Alene Ellis. As a documentary filmmaker, Amberly puts her heart and soul into shedding light on underrepresented individuals and untold stories. Her latest project is no exception – it centers around the female skateboarding scene in Cuba.

Amberly Alene Ellis’ fascination with Cuba is not a recent development. Three years ago she became interested in female filmmakers in Cuba – particularly the accomplishments of Sara Gomez and Gloria Rolando, the first female Afro-Cuban filmmakers. At the same time, she also started to feel drawn to Cuba’s underground music scene through the story of DJ Leydis, a major female figure of Cuba’s hip hop culture. That was when she met Amigo Skate founder Rene Lecour, about one year ago. The story he told her about female skaters in Cuba immediately caught her interest and she decided to share it with the world. Focusing on three teenage girls, Amberly’s documentary Hermanas en Rudeas explores why skateboarding is a difficult passion to follow in Cuba – and even more so as a girl.

So, what is Amigo Skate exactly?

Amigo Skate is a non-profit organization based in Miami. It’s been sending artists, professional skaters and skateboarding equipment to Cuba for seven years now. Amigo Skate also has a branch dedicated to female skaters in Cuba, Amiga Skate. Actually, the full name of the organization is Amiga Skate Yoga because it promotes yoga as well, as this is a sport that targets the same muscles as skateboarding.

Skateboarding there is not recognized as an official sport, so it’s unregulated. The skaters are the ones who are creating the culture and organizing the competitions – they cannot count on the support of the government or become professionals like in other countries. There are no state-organized skate parks, so people have taken raw materials to create ramps and have created their own, homemade parks.

Do only locals skate here or tourists as well?

The tourists bring stuff in. Because of the fact that there are no skate shops, the Cubans can only get equipment thanks to people from the outside. But this phenomenon only started in the early 2000s with the initiative of non-profit organizations like Amigo Skate. Before that, the locals would just skate and create boards with whatever they had at hand.

Do you think that the new relationship between the US and Cuba is going to change things for Cuban skaters?

There are a lot of things happening, but it’s too early to tell. Change may take the form of more foreigners coming to Cuba, or of more intercultural programs taking place. With the end of the embargo, grants are now given from the government in the US to pursue cultural projects in Cuba. But I’m afraid that all this is not really going to benefit Cubans. I’m waiting to see policies that will really improve the life of the Cuban people. Cultural action is good, but not essential.

What is the government’s reaction to skaters?

I spent some time just hanging out on the Paseo del Prado in Havana. This is a long, flat pavement that’s perfect for skaters. Some days the police come and tell the skaters they can’t skate there. They sometimes even take their skateboards away from them – which is a particularly harsh punishment as they then have to wait for a donation to be able to get a new board. Some other days one of the policemen might know one of the skaters so they’ll just allow them to keep on skateboarding and laugh and chat with them.

How is the cultural scene linked to the underground skate scene?

Hip hop culture is another example of underground culture in Cuba, so the two movements were sure to connect. I got to interview Obsesión – one of the first hip hop bands to ever record an album in Cuba – and just to give you an idea of the resourceful underground spirit that’s alive in Cuba, they told me that they recorded their first tracks in the storage freezer of some store because there was no recording studio and they felt the sound was good in this freezer! It’s the same with street art, which is new in Cuba. The government doesn’t commission artists to paint big murals like in other countries. So a lot of these things are merging: hip hop parties are organized in places adorned with street art, or graffiti artists go to paint where people skate, etc. 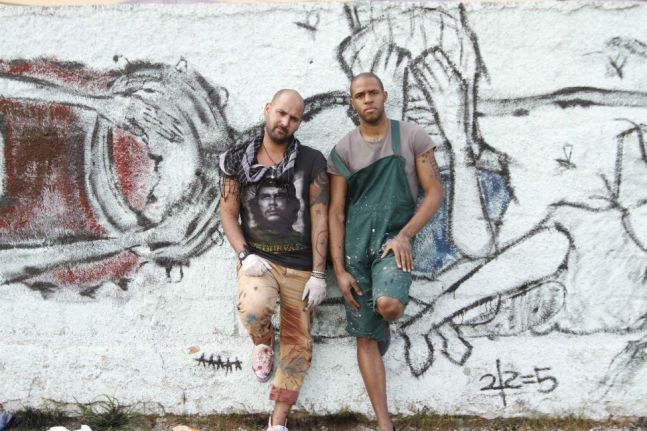 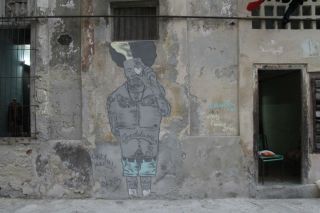 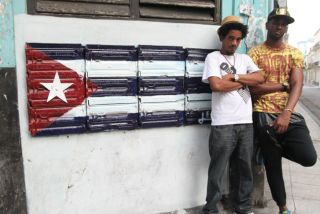 What drives these girls to practice skateboarding?

Well it’s very empowering, in a way. It’s about the first time in their lives that they feel ownership over something. They are the ones pushing the movement, deciding where they want to skate or how they want to dress. It gives them a place in a country where there’s still a lot of machismo.

What do their families think of this hobby?

Surprisingly, the parents of the three girls I interviewed really embraced it! The mom of one of the girls has been documenting her progress ever since she started skateboarding at the age of twelve. But their female friends aren’t as understanding. The idea that women should be attractive is still very fixed in people’s minds, and skateboarding is a sport in which you can scratch yourself or break something easily. So most people on the island believe that skateboarding is not a sport for girls. For instance, one young guy told me that the girls he knew who were skateboarding were “bad at this sport and got hurt and shouldn’t be doing it anyway.” Fortunately, not all of them think that way. The boyfriend of one of the girls I followed for my documentary told me he was very proud of her and very happy that she inspired other girls.

Do these girls have role models in the international skate scene?

Yes. But, of course, they don’t cover skateboarding on TV. The only way to browse the Internet in Cuba is at work or in some public place where people have to pay a few dollars per hour to get access to public Wi-Fi, so they don’t use it that much. Some of the girls told me that they go on YouTube to download clips and then pass these on to their friends via memory cards. That’s how they stay in touch with the international skate scene.

What made you want to focus on these three girls in particular?

Each of the three had their own personality and they impressed me with their tenacity.
Brenda, aged 26, was one of the first female skaters on the island. She’s been skateboarding for more than ten years. So I chose her because she could speak about how things were at the beginning.
Laura, aged 18, is the artistic one. She paints and really loves music. I found her very sensitive and thoughtful for her age. She doesn’t treat skateboarding as a hobby – she knows that in Cuba it has to be more than that.
Daria, aged 15, has a different take on the subject because she’s younger. Things have changed so rapidly in Cuba that even just three years can make a big difference. 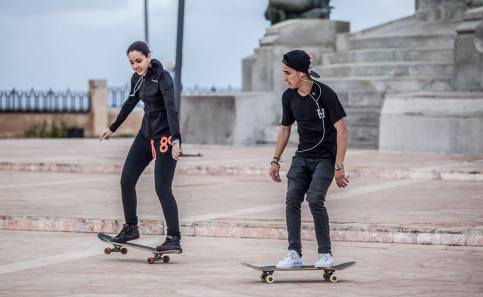 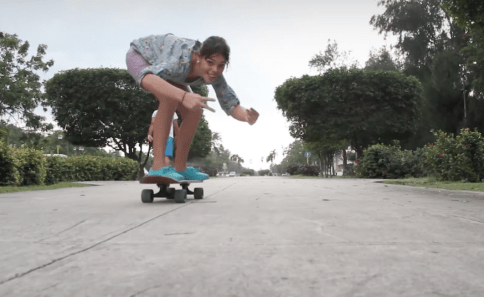 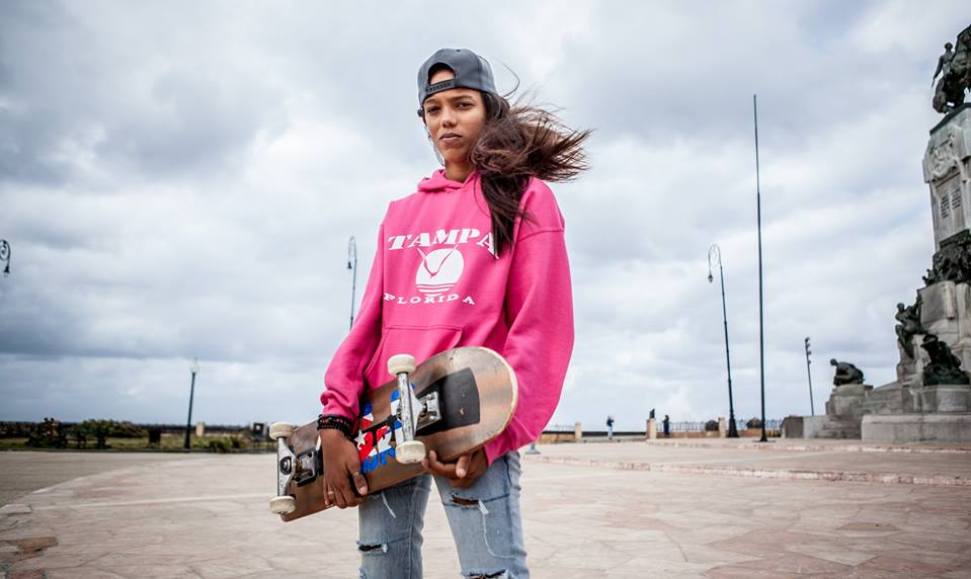 How did you get in touch with them?

It was difficult! I went to Cuba and asked around. I kept asking for girls. Che, one of the guys of Amigo Skate in Cuba, gave me a list with the names of the girls and a number to call them on. But I didn’t manage to reach them by phone so I just went to the street where they lived and knocked at their door, camera in hand. They were quite surprised to see me!

Female filmmakers are as scarce in Cuba as female skaters. Did you feel a special connection with these girls because of that?

Definitely. That’s why I connected so well with the things that they were saying. A lot of people asked who the cameraman was when I told them about my documentary – they couldn’t believe it was me. In Cuba, men think that women shouldn’t carry anything, be it a camera or a skateboard. So we really connected in that way. 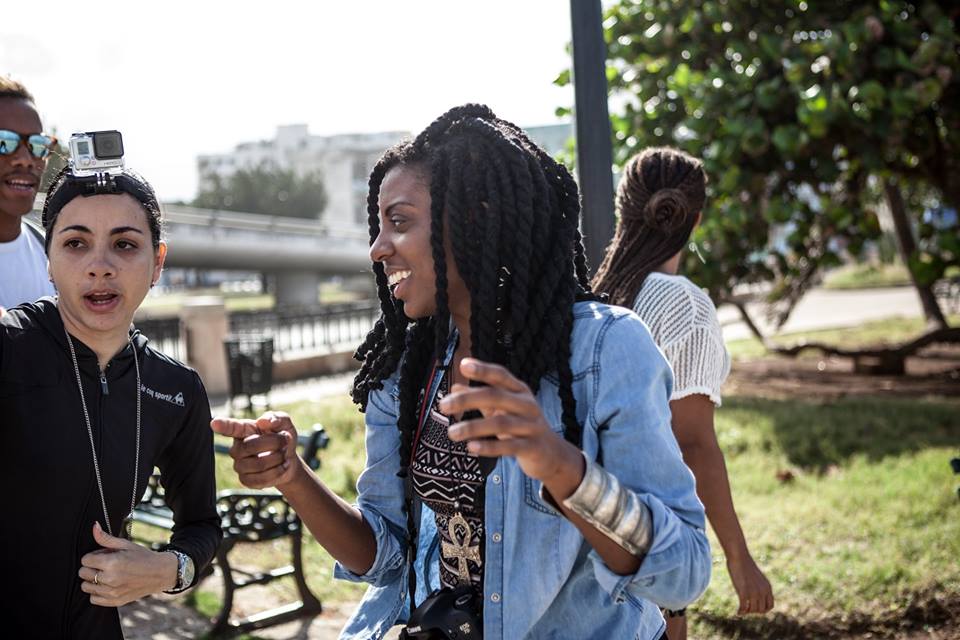 Yes, almost every other day. One of the girls has Internet access at her job, so she has a Facebook account. I’m also still in touch with other girls that appear in the film. Two of them have recently messaged me on WhatsApp asking me to bring along exotic colors to dye their hair next time I visit.

So I guess that means you’re planning on going back to Cuba?

Of course, I want to catch up with the girls and cover other events. I also want to launch the documentary in Cuba. Even though I’d like to show it all over the world, the film is really about them so they deserve to see it first.

Note of the editor (1/11/16): Amberly is no longer working with Amigo Skate, she has renamed the documentary “Hermanas en Ruedas”.