The Ljubljana of Robert Dumendzic, Author of Indie Guides Ljubljana

Indie Guides Ljubljana author Robert Dumendzic is a traveler at heart. He is Slovenian but has also lived in the UK, Spain and Italy. He speaks Slovenian, Serbian/Croatian, Italian, Spanish, and English (and even a little bit of German). So it’s no surprise he decided to become a tour guide. He is also an avid listener of underground and alternative music, and a big fan of urban and contemporary art and culture. For the release of Indie Guides Ljubljana, he shares a few anecdotes with us about his relationship with the city and his love for the local alternative scene.

How does the place where you live influence your work?

I’ve been part of Ljubljana’s underground scene since I was a teenager. I’ve been frequenting underground spots for as long as I can remember. When I go to a concert, it’s always something like this: 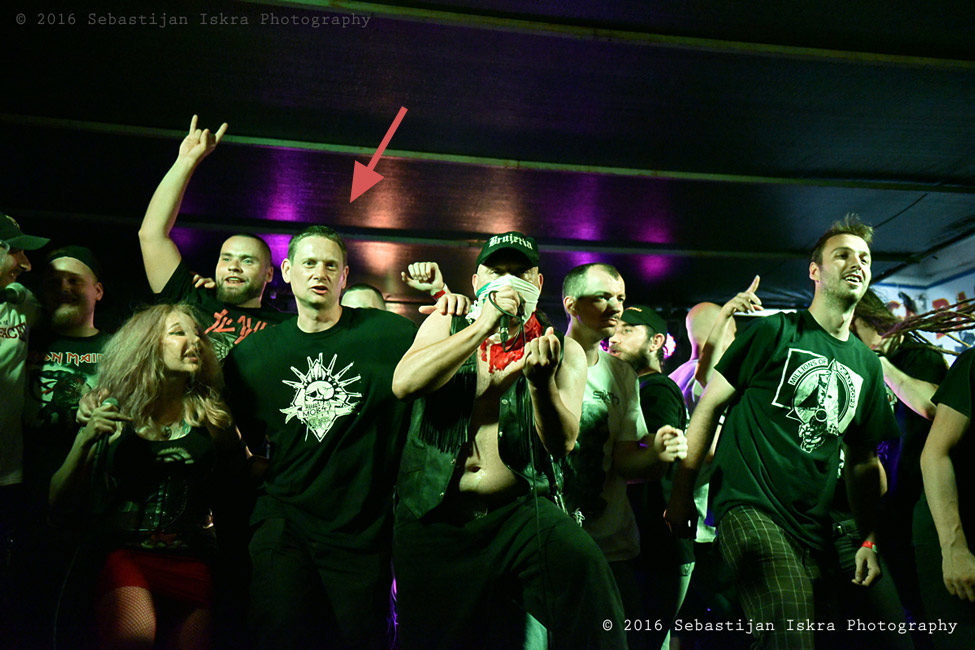 Ljubljana’s central location bordering Italy, Austria, Hungary and the Balkans (Croatia, Bosnia, Serbia) and its status as the capital of Slovenia means there’s always something going on its rich alternative and eclectic cultural scene. Ljubljana has been active on the alternative map since the late 70s, when it established a strong punk movement.

That background has influenced my work, my way of thinking, and my attitude: Money is not everything. I don’t conform to the capitalist system

Tell us about your guilty pleasure in the city.

My guilty pleasure is Kranjska klobasa (a type of sausage) s kislim zeljem (with sauerkraut) in ajdovimi žganci (and buckwheat spoonbread) zabeljeni z ocvirki (with cracklings), which is quite heavy food. Normally, this is a tasty Slovenian mountain meal, but they know how to prepare it in some cafes in Ljubljana, as well.

Recount a funny/moving anecdote that happened to you in Ljubljana.

We went to a concert on the outskirts of Ljubljana. A lot of our friends were there and some of them didn’t come by car, so they needed a ride back to Ljubljana. We had a van and said: no problem, come with us. On our way back the police stopped us and asked us where we had been. Of course, we explained that we went to the concert and just wanted to go back to the center of Ljubljana. After one of them had a quick look at our van, he told us to get out. After a minute, there was a group of around 15 people wearing alternative outfits standing in front of the van which had only seven seats. The police officer told us that by law, only a driver and six other people could stay in the car and the others would have to stay behind. We explained to the police officer that there was no night bus at that hour and if half of us stayed there, it would cause commotion among the locals and he would have to come back, which would mean extra work for him. His dilemma was to either let us go or to leave a group of strange looking people in the middle of nowhere. In the end, he let us go and we were laughing all the way back to the center of Ljubljana.

What do you dislike the most about Ljubljana?

The majority of people are quite conservative and small minded. I can’t stand them. And I do not like the city’s size. For me personally, Ljubljana is way too small.

What would you miss most if you left Ljubljana?

I would miss my friends who live in the city full time. These are people I’ve known almost all my adult life and they are my closest friends. They’re the people I call first when something important happens. Even when I go months or years without seeing them (because of my traveling and living in other countries), it’s like nothing has changed when we see each other again.

What is your favorite food/drink in Ljubljana?

My favorite food in the city is Čevapčiči (it’s a Bosnian delicacy made of grilled calf and lamb minced meat), at a place called Das ist Walter. Mouthwatering meat served with flatbread and onion. I usually order a Fiver (5 piece portion) and Tenner (10 piece portion) when I am starving. This is another heavy food, with plenty of calories. After all, I’m 6’2’’ and weigh almost 200 pounds ☺

Where do you go when you want to escape the city for an hour?

Šmarna gora (gora means mountain) is a small mountain that’s 2,194 feet tall. Whenever I want to escape from the bustle of the city, hiking/walking up for half an hour to the top of Šmarna gora is always a great idea. There are countless steep paths to choose from to get to the summit. I always order a drink and enjoy it while overlooking one of the most beautiful views of Ljubljana. It is even better when I go with a friend, because I am a sociable person and prefer to be in good company.

Name one local artist that you think everybody should know about.

Kolja Saksida is a filmmaker, director and producer of short animated films. The most famous is a series of stop motion animated short films with a main character called Koyaa. He has won a few awards, among them were the special jury prize at the Alternative film festival, and an audience award at Animateka festival.

What song do you feel would best describe your city?

Pankrti – Lublana je bulana (1978). Literal translation is Ljubljana is sick. It is almost 40 years old and comes from Ljubljana’s most famous punk band Pankrti. You would think it is completely outdated, but Ljubljana is still quite sick. And the vibe of the song is still right on point.

What city do you dream of discovering?

Tokyo. It’s like going to another planet. I would like to go to a place where I don’t understand the language and I am not able to read or write anything useful. And I don’t even want to start with how different Japanese culture and society is to us outsiders.