We discovered Il Culo di Mario a few months ago thanks to the excellent compilation series EurNoVision. We couldn’t help but love this band who has turned lo-fi and the absurd into a real lifestyle, and whose name literally means “Mario’s Ass”. A few emails later and here we are: Il Culo di Mario shares five of their favorite spots and bands in Milan with us below. They even made a drawing for the occasion! Follow Il Culo di Mario all over the city and discover the places that have influenced the band’s story the most. 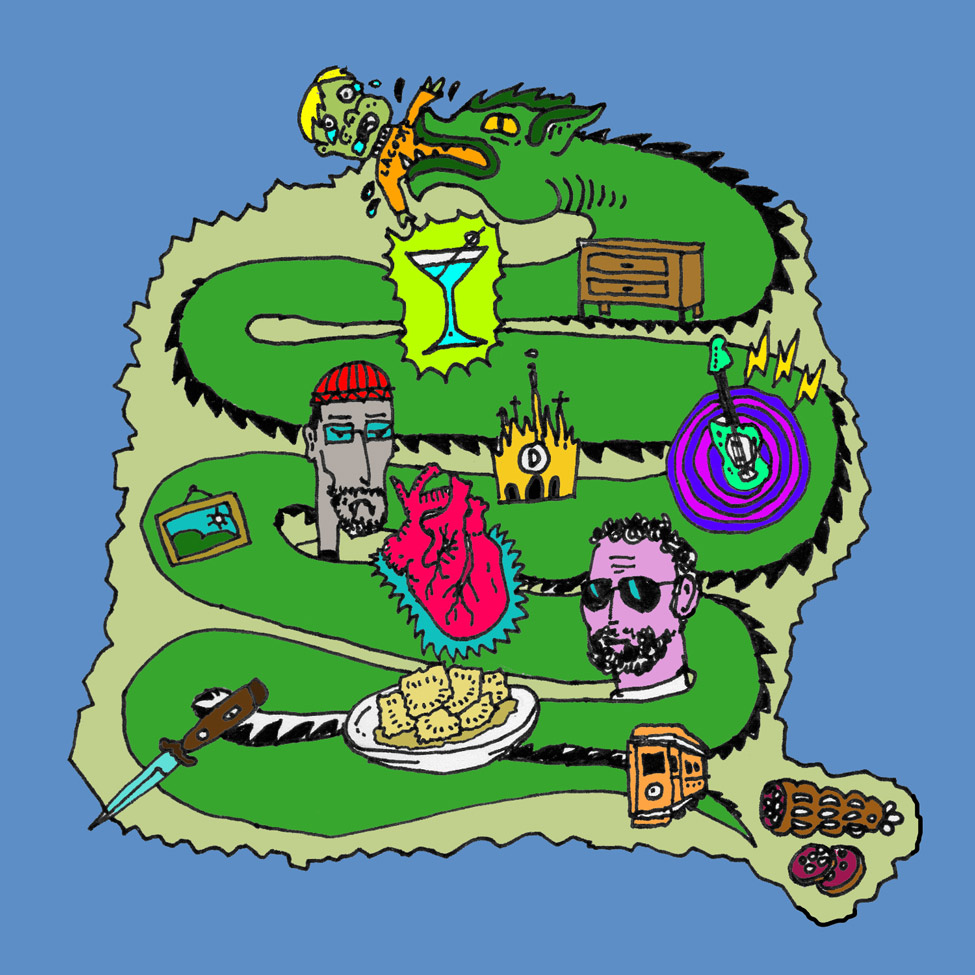 Too European for Italians, too Italian for Europeans, Milan is forever caught in this awkward middle ground. Yes, we know: there is no sea, no beach, not much sun. Instead we have cold wind and thick waves of fog, and nearly everyone seems really busy running around, always a little bit behind on their packed work schedule (years of people-watching led us to believe that some of those people are not so busy, they’re just faking it to look cool). Happy hours, design, fashion weeks, nightlife… we are not talking about any of the stuff that pops up every time we tell people we are from Milan. Soulless and busy, but bustling and fiery, this is the hometown of Il Culo di Mario and, for better or worse, it’s responsible for our sound. The things below are our top picks, the places in Milan that helped define us as a band.

Located in the heart of a multicultural working class neighborhood that looks to be the next victim of the gentrification trend that’s already hit Isola, Navigli and some other areas of the city, Ligera (meaning “low life thug/street criminal” in local dialect) is a nice traditional bar that has been hosting readings, film projections, and concerts since 2007. The bands who play there include some of Italy’s top ultra-underground acts like Pay (Milan’s own great punk veterans), Plankton Dada Wave (Joy Division overdosed on gummy bears while bingewatching Teletubbies), La Tosse Grassa (crazy mashups, crappy loops, absurd cut-ups, and ultraviolent language are just a few of the ingredients in Vanni Fabbri’s one man band), Da Rozzo Criù (in an alternate/illiterate universe, male strippers from the Full Monty on acid raped all the members of Eiffel 65) and of course Il Culo di Mario. This was the first club ever to book our gigs, actually.
While we’re talking about bands we like, if you take the above-mentioned list and add the super virtuoso and crazy ass motherfuckers’ punk trio Actionmen and their psyched-out side project Cacao, you will have a complete overview of the best five Italian acts of all time, in our opinion.
https://www.facebook.com/spazioligera/

In a city internationally known as a center for fashion and contemporary art, to open a small gallery that deals avant-garde, unprecedented and little known artists might be a bold move, but Orio Vergani (who is the nephew of the first ever Italian photo journalist of the same name) is a fearless, punk-edged entrepreneur, brave enough to host the premiere of DOVETE, our third record, followed by an unforgettable (at least for us) midnight gig.
https://www.facebook.com/ngroca/

Simply put, this former garage is the best spot in town to enjoy live music. One of the owners, Giorgio Prette, spent more than twenty years behind the drum kit of nationally acclaimed rock band Afterhours, touring the whole country and playing in virtually every single club of the peninsula. When he left the ensemble in 2014 to pursue other projects (including setting up a club) he was very clear on what he wanted: a place with high standards for the sound when it came to playing live shows. On top of it all, there’s a bar with talented bartenders and some of the best DJ sets in town, like Karmadrome (“the first original Milanese indie night” with 80s and 90s music). Playing there was amazing, it made us seem like expert musicians, at least for an hour!
https://www.facebook.com/SerraglioMilano/

In May 2016 we launched our Kickstarter campaign “in order to make a strawberry & champagne risotto” and a dinner concert. Our goal was to raise 80 euros. It was supposed to be an eat & listen experience for 10 people. However, it turned out different: we raised 1003 euros from 40 people! So, we decided to share everything with our friends and find a proper setting for this cornerstone event: Villa Aida. Located a 10-minute subway ride away from the city center, this beautiful villa from 1929 boasts two unique apartment accommodations with amazing antique furniture, a fully equipped kitchen, washing machine, and over 10,000 square feet of private garden space (in the summertime there is also an outdoor pool). Amazingly enough, in Milan this is a special place where you can wake up to the birds chirping and in the evening, you might even spot a hedgehog (I always thought those animals were invented by SEGA)! The owner Carla is a special person, always putting extra care into everything she does.
https://www.facebook.com/Villa-Aida-Milano-1634726360143007/

Like many Italians, when we have to talk about gigs, new music ideas, crazy psych artwork or silly merch, we do it in a restaurant. Among our favorites, Bettola di Piero deserves a special mention. Although “Bettola” means “greasy spoon” in Italian, make no mistake: Monica and her staff make top-notch comfort food mainly from the Lombardy and Piedmont culinary traditions. Warm sixties interiors, a very well-curated wine list, friendly service and a fixed price lunch menu during the week that is a steal make this a really special place for us. In fact, we mention it in our song Coco Tutugno. A bit of trivia: Bettola was also the set for the restaurant scene in the 1987 movie “Kamikazen, Ultima notte a Milano” from Academy Award Winning director Gabriele Salvatores.
https://www.facebook.com/labettoladipiero/