Tokyo is a city defined by contrast. It was this aspect that fascinated Skander Khlif, inspiring him to wander the streets of the city last May with his lens, on the lookout for moments and faces to capture. Through his photos, the photographer shows us a Tokyo where malls and luxury boutiques mingle with little authentic bars and sumo tournaments.

In this series, photographer Skander Khlif sets his sights on Tokyo to reveal a city in constant flux between modernity and tradition. Although in his words, “photo-journalism, street photography, narrative, and visual arts are both very different, yet alike at the same time,” his photographic style succeeds in combining all of these arts, transporting us to Tokyo right along with him. Skander Khlif returned from his journey with bags bursting with snapshots. We selected a few and asked him to walk us through the stories behind the images. What follows is a feast for the eyes and the mind. 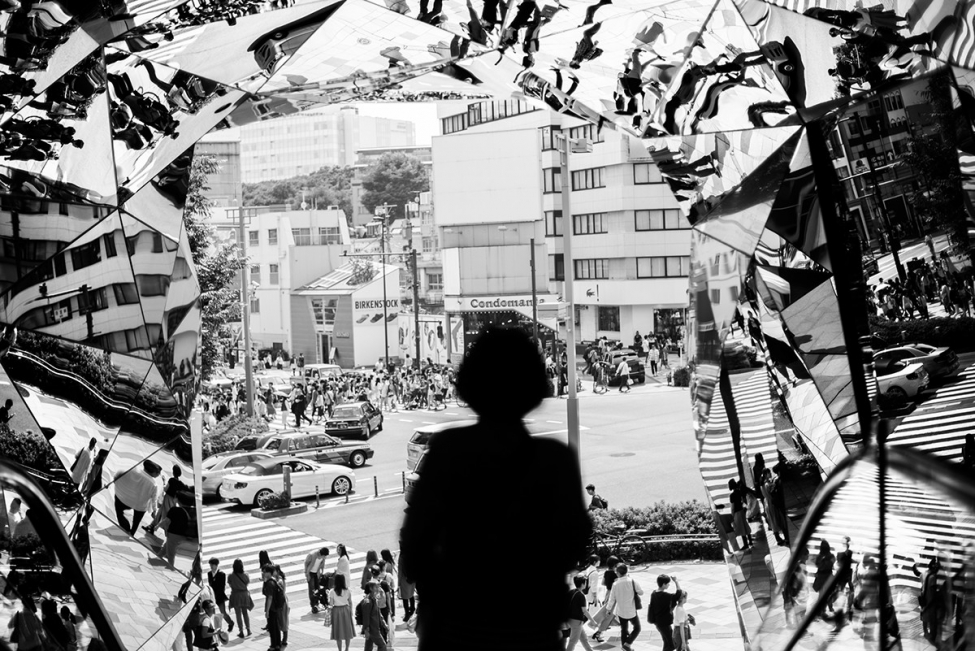 In Europe, Sunday is a calm day. Most people spend time with their families, while in Tokyo, it is just another shopping day. Thousands of people can be found hitting the shops to buy luxury clothes. I took this photo from an escalator leading up to the entrance of Tokyo Plaza, a brand-new mall at the top of the long, tree-lined avenue of Omotesando. 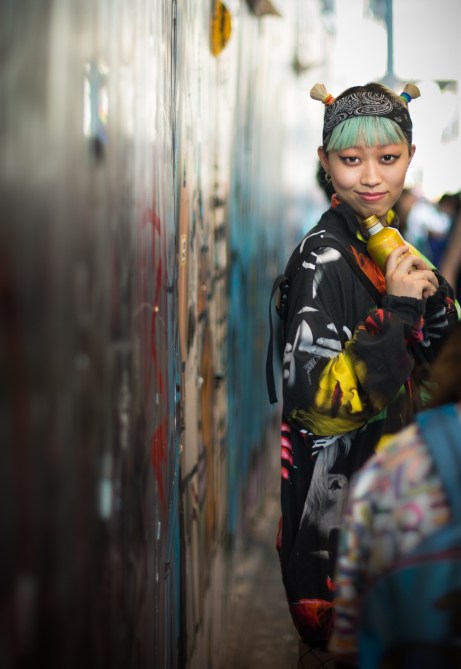 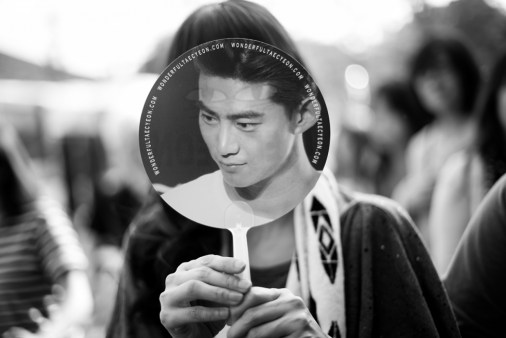 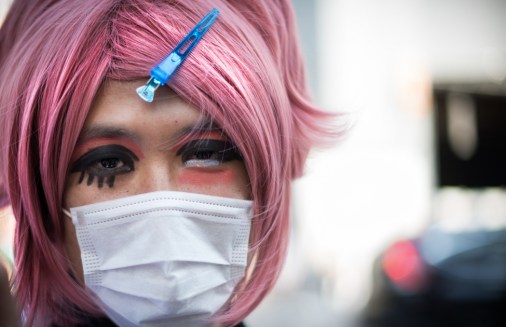 Harajuku, in the Shibuya neighborhood of Tokyo, is the most extravagant area of the city. You can find all sorts of people there, from emos to punks, to manga fans, as well as more typical styles. It is a real paradise for street photographers. I spent a day wandering around there, waiting to make eye contact with someone interesting. The initial reaction of the girl in the black and white photo was to hide her face with her fan, which was decorated with a man’s face. I just asked her to hold it a little higher before photographing her! 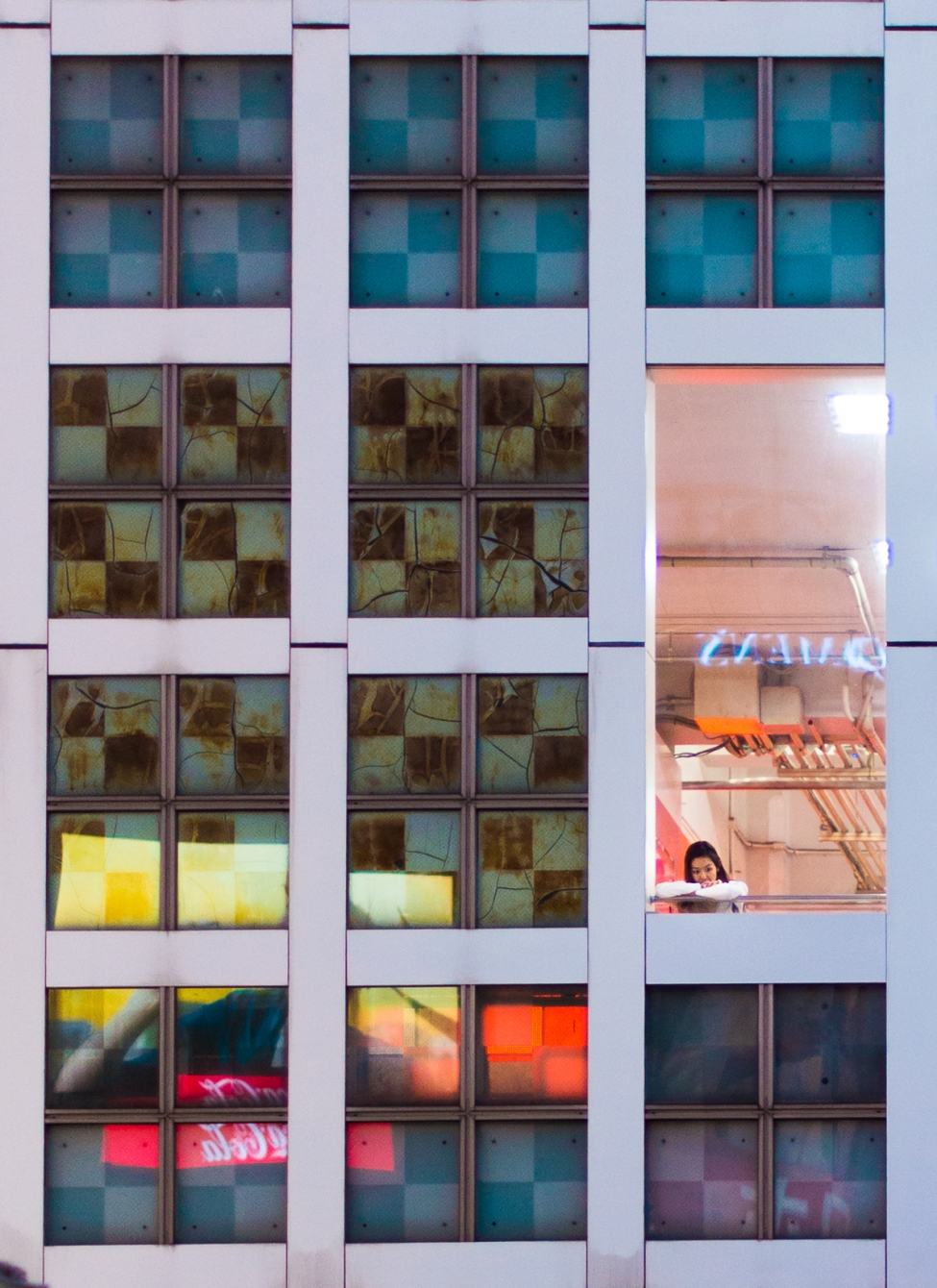 A geometric pattern, a minimalist view, a pensive girl! I was moved by the sense of serenity emanating from this scene. But what the girl was watching was actually Shibuya: one of the busiest and most famous intersections in the world. 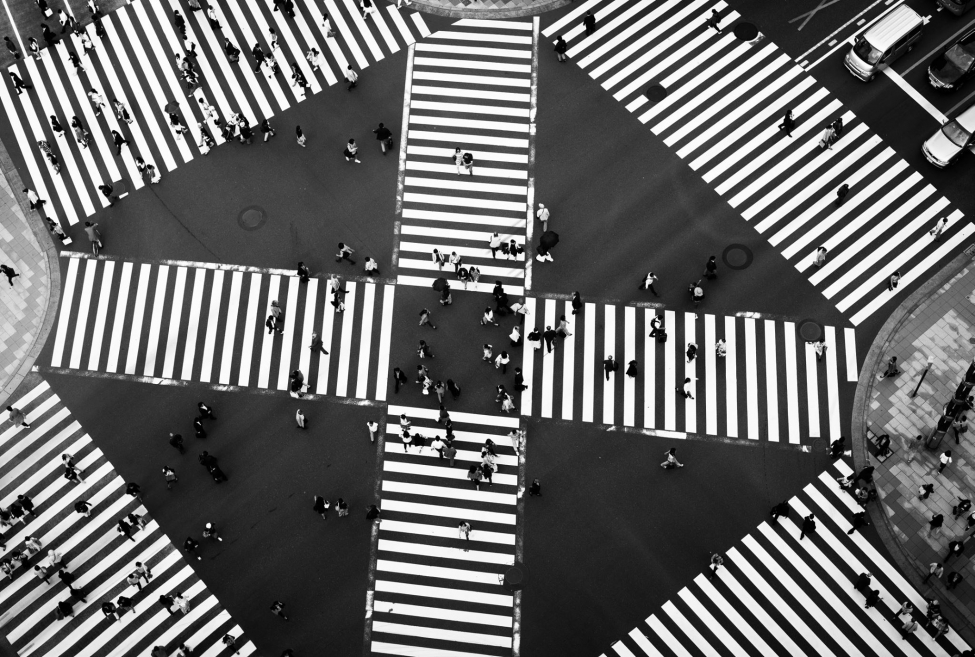 One of the things that drew me to Tokyo is the contrast between perfection and madness there. Ultimately, the birds are the ones who benefit the most from the aesthetic perfection. The patterns, geometry, lines… seen from above, everything seems to be perfectly placed. 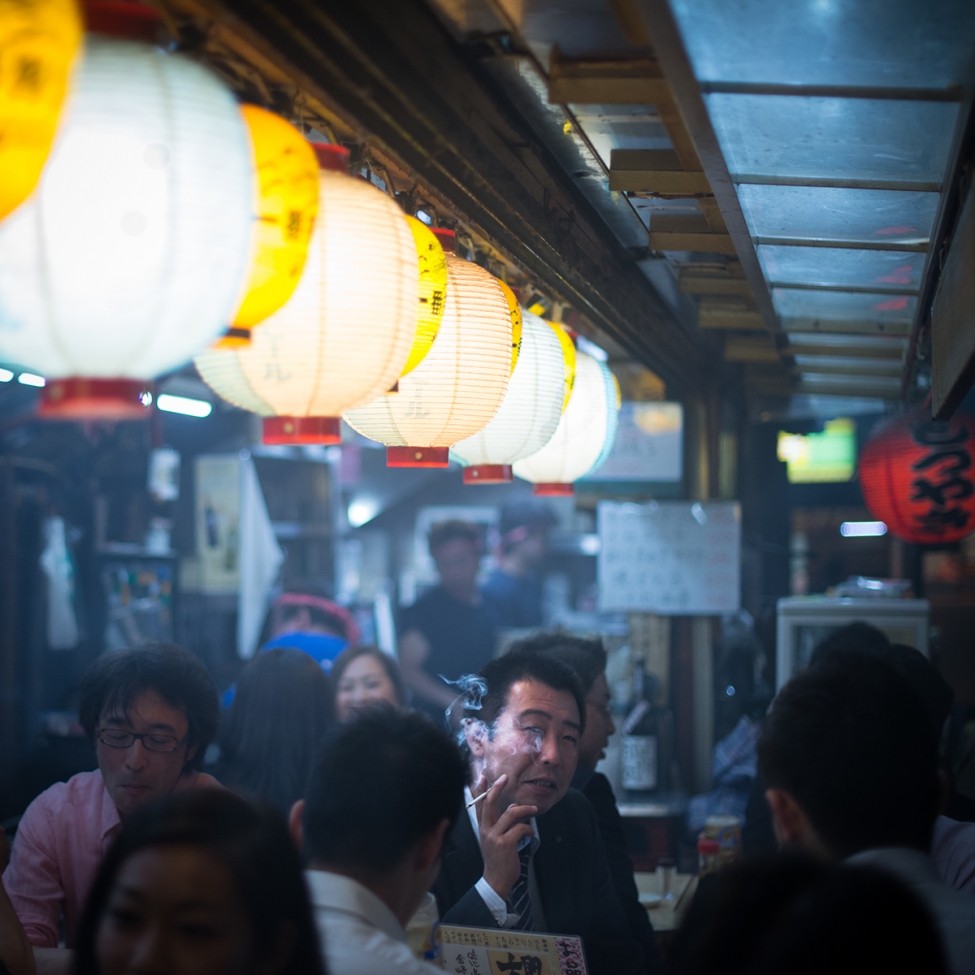 Ginza is definitely the most varied neighborhood in Tokyo. Everyone thinks of it as a chic place where all the biggest luxury stores and buildings are located. But past the main street, you can find hundreds of tiny bars and lovely popular restaurants filled with employees coming to relax after their workdays. I noticed this charismatic man in the middle of the crowd, so I waited a few seconds until he looked my way and then, click. 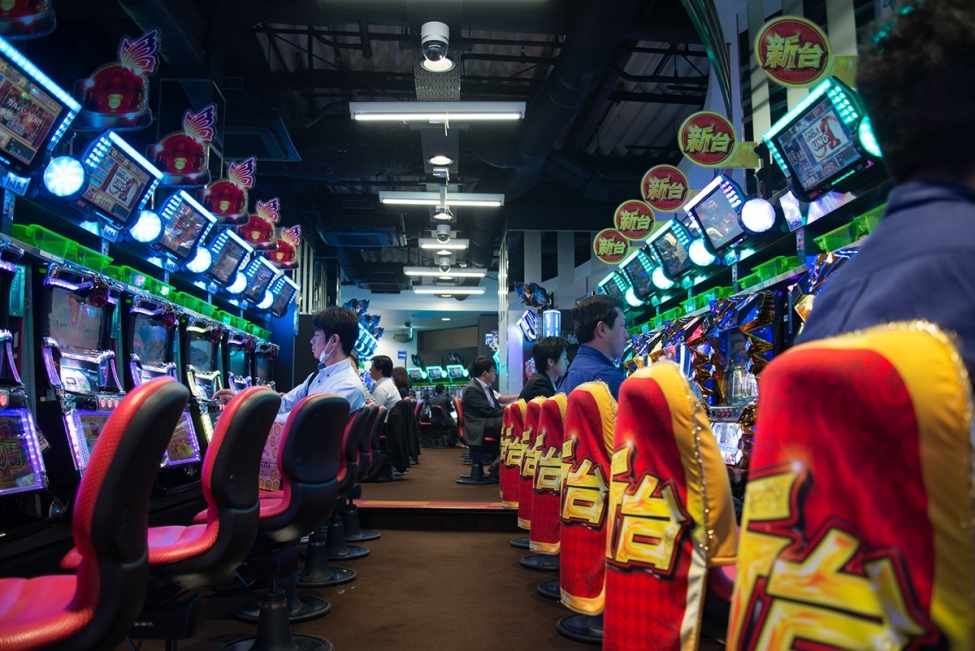 Akihabara is a monument to gaming. The arcades in this neighborhood are open 24/7 and Tokyoites can’t get enough of them. 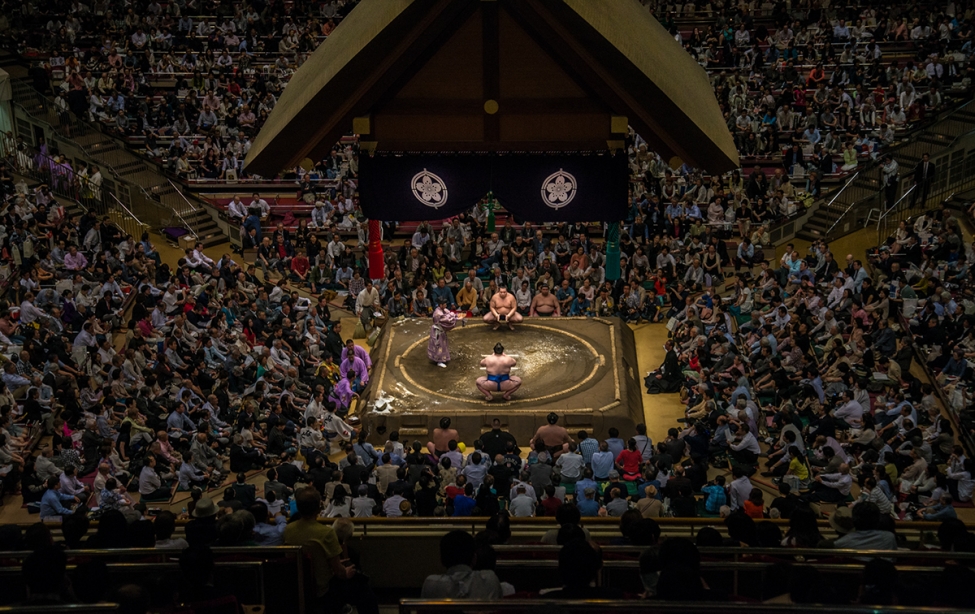 I took this photograph during a honbasho in the Ryōgoku Kokugikan stadium, located in the Sumida neighborhood. These huge sumo tournaments take place in Japan six times a year over a period of two weeks. Three of them are organized in Tokyo, and three others in Osaka, Nagoya, and Fukuoka. During this one, I could see a ton of professional photographers busy zooming in on the competitors. But since I was just a visitor, the arena, the rituals… every detail was fascinating to me. 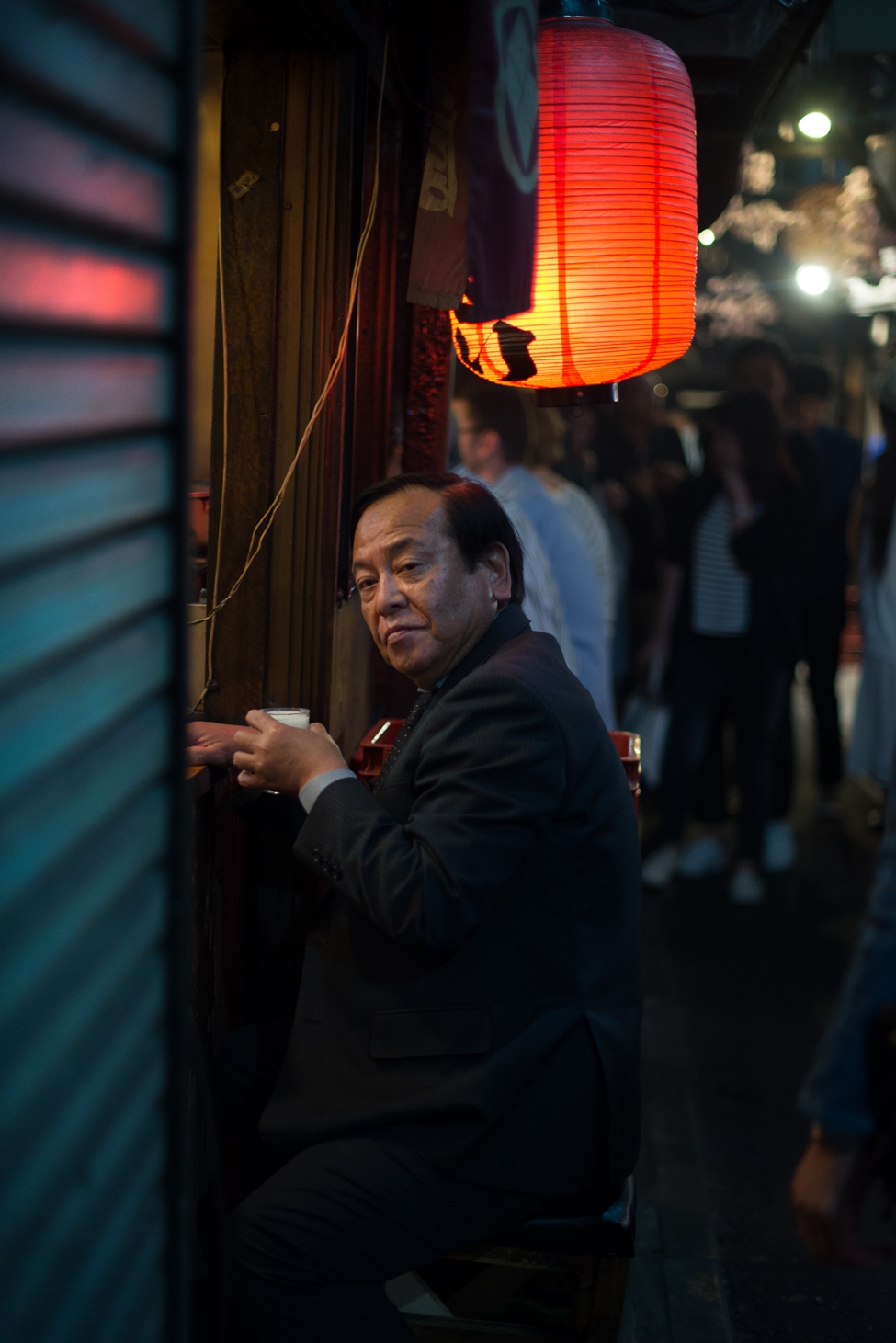 A man eats his evening soup in one of the tiny bars of Golden Gai, a section of the Shinjuku neighborhood known for its nightlife.

Discover Tokyo with our city guide Indie Guides Tokyo dedicated to cultural and alternative locations in the city.