There’s a restaurant in the 19th arrondissement that has little to do with ordinary dining experiences. Set in a squat, run by volunteers and costing nothing, the Freegan Pony puts all its focus on showing that gastronomy can be eco-friendly, by using the produce destined for the bins to create delicious vegan cuisine.

Founder Aladdin Charin began waging his war on food waste with the Freegan Pony in November 2015. It wasn’t so much a choice as a necessity: for him, the city needed an alternative to the food industry. This alternative is freeganism and the Freegan Pony is a restaurant where no two nights are the same: each night welcomes a different chef to lead the kitchen and the menu never lasts more than the day.

Calling an abandoned breezeblock warehouse under the périphérique its home, the Freegan Pony has already succeeded in setting itself apart from the typical Parisian restaurant scene. In an area that he describes as “a bit of a desert”, Aladdin says that he chose Porte de la Villette on the city’s northern edge precisely because he wanted to bring something new to an area where there was little else happening. This choice of location seems inspired by the same idea driving the project’s approach to food: reclaiming wasted space and turning it into something not only usable, but also unique.

Inside, the 500m-squared place is cavernous and cosy at the same time. Sitting among salvaged furniture and antique-style knick-knacks gives you the feeling of being somewhere between your grandma’s living room and an underground bunker. The atmosphere is laidback and sociable and the crowd, eclectic. There’s a bar where you can buy cheap wine, beer and soft drinks, but bringing your own doesn’t seem to be a problem – pretty much anything goes at the Freegan Pony. 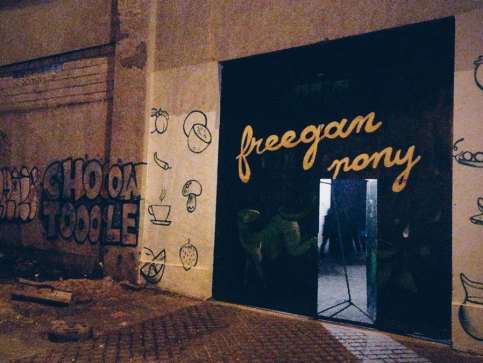 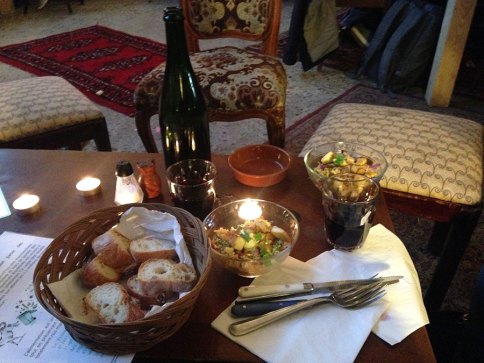 That’s all very well, but what’s for dinner? Well, whatever the rest of the shoppers at the nearby Rungis market didn’t want to eat is the answer. The produce the team manages to salvage that day is what shapes the three-course menu, but it’s far from shriveled tomatoes on a bed of wilted lettuce leaves, if that’s what you’re imagining.

Diners at the Freegan Pony last Friday night were served a Vietnamese tofu salad to start, followed by a spicy vegetable tagine with cauliflower mash and banana bread with tea-infused panna cotta for pudding. The opinion at my table was that the tofu salad stole the show, which isn’t something committed carnivores expect to hear themselves say. Not only are the menus fresh, flavoursome and a victory for the health-conscious, but the food is presented artfully too. Could I have done much better if I had a whole supermarket at my disposal? Maybe, but probably not.

Where this meal differs most from the norm is that there’s no bill at the end of the night. The Freegan Pony operates on a “pay what you can” basis, meaning you’re only asked to pay as much as you want, if at all. Without the obligation, Aladdin says that those who can afford to pay tend to be generous. He also believes that it’s this policy that draws in local people from Porte de la Villette as well as those from central Paris, allowing for a diversity that he feels strongly about.

At the same time, no fixed pricing places some obvious limitations on the kind of investments the team can make in the project, which, on top of pressure from the local authorities to change location, leaves the Freegan Pony in a precarious position. But this precariousness, the uncertainty of whether this little freegan warehouse paradise will be open next weekend or not, is part of the whole charm. Aladdin comes across as a very unfazed but determined kind of guy, and when we asked about the kind of people who volunteer in the kitchen, he shrugged and said pointedly “well, why not you?”

For more on the Freegan Pony and to get in touch with the team about getting involved, head to their Facebook page: https://www.facebook.com/Freegan-Pony-1627473020835867/