Don’t even think about calling it street art! Though it’s true Elizabeth-Ann Doyle and Emmanuelle Hébert have transformed every corner of Montreal with their immense outdoor frescoes, the two MU co-founders prefer to call them murals. More than just an art project, their work also has a social objective: to change the city by beautifying the environment in lower income neighborhoods.

Since creating MU in 2007, Elizabeth-Ann Doyle and Emmanuelle Hébert have introduced over 80 murals in fifteen neighborhoods of Montreal. These monumental works have a profound effect on the city’s image. It’s impossible to take a walk in Montreal without seeing at least one! For every project, MU is involved in every step of the process including funding, logistics, and maintaining the artwork over time. They also host mural-making workshops for teenagers and dialogue with the communities where the murals will be displayed. Below, Elizabeth-Ann Doyle shares her process with us, along with some of the social and educational impacts her work has had in the city.

How do you decide when to do a new project on one of the walls of the city?

Each project is managed a bit differently: we start from scratch every time. It’s a challenge in terms of organization, but that’s also part of the beauty in what we do. Even though we do have a group of artists and collaborators we work with regularly, we also hold public competitions, send out calls for applications and respond to special requests, as well. Sometimes building owners will contact us, and we are also commissioned for birthdays and commemorative events. In 2014, for example, the Old Brewery Mission, a non-profit organization that helps the homeless, was celebrating their 125th birthday, so they asked us to create a fresco on one of the walls of Pavilion Patricia Mackenzie, the biggest women’s refuge in Canada. That project led to Eclosions, a women-centered mural intended to give pride and dignity back to those living in the center by showing them that homelessness is nothing to be ashamed of, and it doesn’t need to be hidden behind gloomy-looking walls. 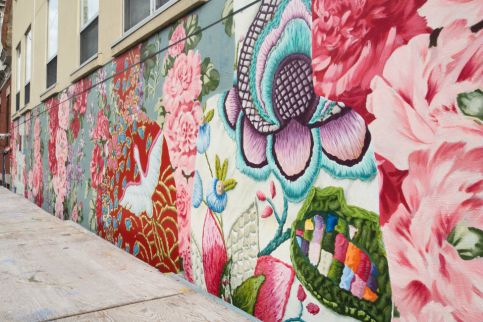 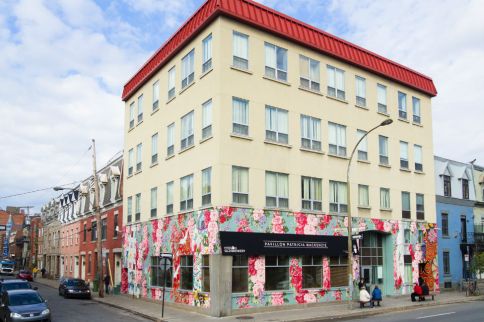 What made you choose Montreal for MU?

We can’t imagine working in any other city. Montreal has officially made a name for itself as a cultural metropolis. It is home to many people working in the arts and has a lot to offer culturally. Montreal is a breeding ground for creative projects, and the city itself is very supportive of us both logistically and financially.

Have you seen any social impact as a result of your work?

Yes, and that’s why the city supports us. The most striking example is the mural we created in the Jeanne-Mance Housing Corporation located in the heart of the Latin Quarter. Ten years ago, the housing project was in terrible condition. Since its restoration, it is now home to community gardens and has even become a popular stop for tourist buses. We saw the people who lived there really take ownership of their space.

How does that reclaiming of a space happen?

At first, the residents are a bit hesitant, they don’t always understand what we’re trying to do. The areas where we work are often home to different ethnicities and they don’t always have the same relationship to art that we have. We’ve found that you can’t impose these things – the murals are living things that change over time. They often take six to eight weeks to complete, which gives us time to win the locals over gradually. People are very curious. They often come up to ask us questions. They tend to watch us from afar at first, then eventually they come to say hello, and by the end, they’re bringing us sandwiches, chairs, and even inviting the artists into their homes!

Tell us about the work you do with teens.

We offer painting workshops for kids ages 13-17, which helped us earn status as a charity organization. The murals help us establish a dialogue with young people and help kids discover careers related to the arts. Since you have to sign up to participate in the workshops, we end up working with kids who are already interested in the arts. But in any case, street art is a mode of expression that seems to be particularly appealing to young people. 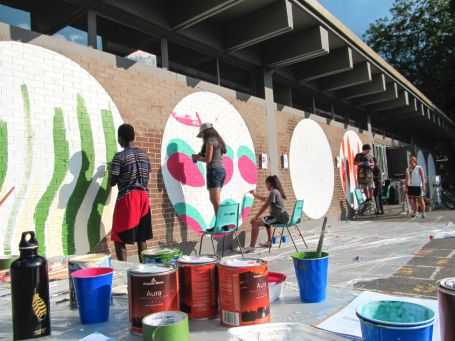 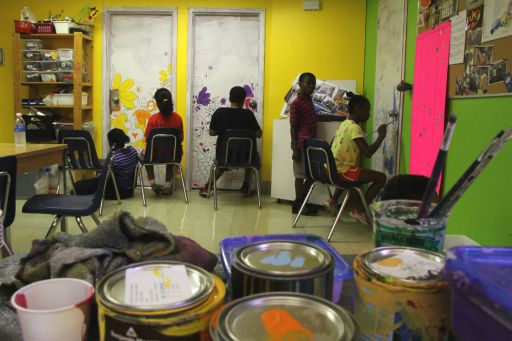 Do you get any criticism for wanting to give credence to street art?

Sometimes. But we don’t do street art, we make murals. It’s different. Street artists might criticize us for making street art less natural and spontaneous, but large format paintings and graffiti have existed since the dawn of time. It’s important to understand that we do differentiate ourselves from street art because the frescoes we create aren’t a blank canvas for artists – rather they reflect the local community. We use our art to stimulate change, to help people see the city differently. Our philosophy draws inspiration from Philadelphia, for example, mural capital of the world, and the Tony Garnier neighborhood in Lyon.

Has your work ever been vandalized?

There have been three cases of vandalism in ten years. Considering that we’ve done 80 murals in ten years, that’s really not a lot. When it happens, we have to repair the artwork. We maintain the art over time, which also differentiates us from street art – we manage their creation and conservation.

What plans do you have for the future?

One plan is to continue a series we started in 2010 entitled Hommage aux bâtisseurs culturels de Montréal (Homage to the culture builders of Montreal). The collection aims to honor various native Montrealers who have contributed to the culture and blossoming of the city. As part of this series, we worked with the artist Gene Pendon last year on a project honoring the writer Dany Laferrière.