Halifax Through the Eyes of Psyche Pop Band The Everywheres

Tucked away in the far Eastern part of Canada between Saint-Pierre-et-Miquelon and the American coast, Nova Scotia is off the beaten tourist track, and yet it’s overflowing with attractions, boasting untouched nature and dynamic cities. To learn more, we contacted Sam Hill—guitarist, singer and composer in The Everywheres; a band that’s been rocking us gently through long winter nights for years with its luscious psychedelic pop. Originally from Halifax, the capital, Sam Hill guides us through “the world’s biggest little city,” an active city rich with history that looks like a great place to live.

The city’s must-see places for newcomers?

If there was an interesting show going on then I’d take them to Gus’ Pub. It’s on the corner on North & Agricola in the North end and has been around forever. A show every night of the week / something for everyone! and rumor has it that they’ve got a new carpet and PA system. But even before that I guess we would go to Java Blend Coffee on North Street. Since 1938, they roast their own coffee out back (where I work scooping beans) so perhaps I am slightly biased but it is the best coffee you can get anywhere in the world perhaps. You will run into at least everyone you know there on any given day and the folks who work there are the nicest you’ll ever get to meet. My favorite restaurant is a place called Jincheng on Dresden Row downtown. It’s the best Szechuan food I’ve ever had and there is always a really cute young boy watching cartoons in there.

It’s difficult to pick a place that no one truly knows in Halifax as the city itself is quite condensed being on a peninsula. Having said that there are a few places “off the beaten path” that I like. Personally I like walking in the South End, so far south that you get near Point Pleasant Park. In the summer when the students are gone from the big universities down there it’s particularly somber and beautiful late at night. Beautiful tall trees. I have also recently been loving the side of Fort Needham Park in the North End that faces away from the harbour.

The neighborhood you prefer to avoid?

Sometimes the South can be crazy when the ping pong tournaments are going on but even I enjoy some shouting sometimes. Actually Young Street is pretty fucking ugly unless you dig steak and stein.

The most exotic spot?

Halifax is certainly not the most exotic city in the traditional sense of the word but it is a regional hub for Eastern Canada and there are cultures from all around the world here. During the school year you will run into students from everywhere in the South End going to Dalhousie and SMU, and a lot of students from southern ontario. The north end is traditionally a working class neighbourhood where you will find families who can trace their roots back generations. Some worked at the railroads, shipyards and warehouses before and after the explosion, some are decedents of the black loyalists who lived in the community of Africville (before it was shamefully demolished and the residents relocated against their will in the 60’s), some are artists and musicians and activists who came for the low rent and openness to create. Nowadays there is a lot of gentrification going on and creeping further and further north. Halifax is rich in history and for that reason I think the whole city is exotic. If you are coming from many places I think that’s plain to see.

The Harbour Hopper. It’s this weird truck painted kind of like a frog that turns into a boat and drives into the harbour sometimes. It’s around in the summer for the tourists who come. It seems nice in theory but I was stuck behind it in traffic the other day driving the Java Blend van downtown and I heard the tour guide talking over the PA about the Titanic for like 39 minutes. Too much talk of the Titanic on an amphibious vehicle. Bad vibes. Yep lot of Titanic history here. 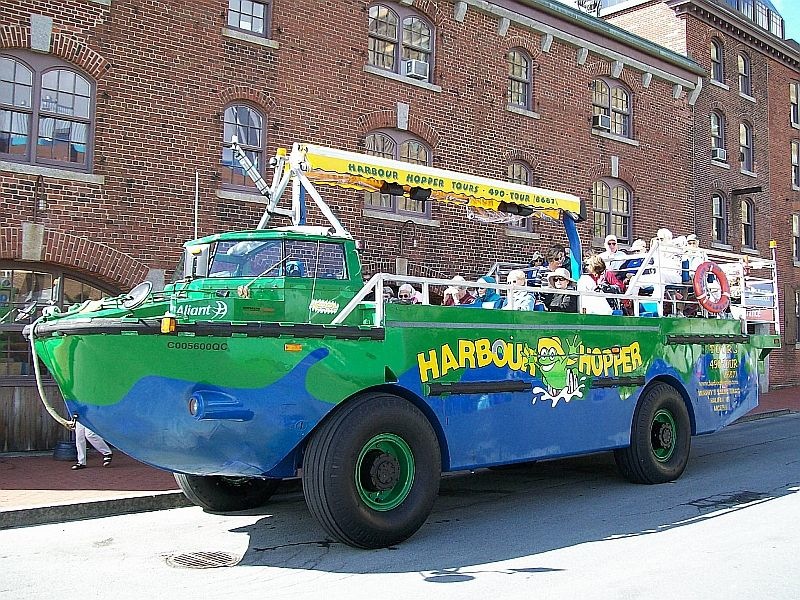 I will avoid the ghost stories about the Titanic and Halifax Explosion and head straight to my favorite for this one. So in the Harbour there are two islands, McNabs and Georges Island. Georges has a lighthouse and an old fort called Fort Charlotte. At the top of downtown Halifax is Citadel Hill which has a long history but was first established in 1749. Legend has it that there are tunnels beneath the city from its days as a garrison town guarding Nova Scotia from the French and whoever else the British felt they had to. Some say that tunnels run from the fort at the Citadel all the way downtown and under the harbour to Fort Charlotte on Georges Island. Nothing conclusive ever discovered but it has always piqued my curiosity. Halifax Harbour is one of the deepest harbours in the world however so it’s most likely not true in any way shape or form. Oh well we can dream.

The first thing you’d do if you were mayor?

That is a tough one. It feels like governments in Nova Scotia, whether municipal or provincial, have been absolutely out of touch with the populace for as long as I can remember and probably decades more. Maybe I’d stop tearing down beautiful old heritage buildings and instead of pouring public money into the pits they left I’d walk down the street and ask the regular folks what they would like to see happen. I’m sure I could muster a better answer than that but it’d take a few pages and as I said, I’d have to talk to the regular citizens of the city first.

Difficult to answer as there are so many. Jazz Fest, Obey Convention and Halifax Pop Explosion  are the big music festivals but are just the tip of the iceberg I think. My roommate Erin worked on the Halifax Independent Filmmakers Festival this year and it was great. Good job Erin.

What makes you proud to live here?

A lot. So many hard working people, kind people, welcoming people. I also love the accents.

And what embarrasses you?

Well, as with all cities founded as colonial outposts of some European empire there are many, many things in the history of the city to be ashamed of. There are still obviously problems that carry on but I think there are a lot of great people working to make things better.

A motto to make us want to visit?

Ok here are a few that I think the city has been ignoring.
“The biggest small town in the world!”
“Feel the salty fog soothe your skin!”
“Long for the fog to come back when it’s sunny for too long!”
“Toronto sucks, stay here!”