As Record Store Day approaches, we wanted to talk to you about one of our favorite places: La Fabrique Balades Sonores, a record store in Paris that also sells adorable handmade items. We sat down with Toma and Chicamancha over coffee to talk about the store. Here’s what they had to say, along with an eclectic playlist of their current favorites!

You have to be pretty brave and a little crazy to open a record store in the days of streaming and mp3s. But against all odds, Balades Sonores opened not one, but two shops (the first in 2012 and the second in 2015) at 1 and 3 avenue Trudaine in the 9th arrondissement of Paris. And rest assured, La Fabrique Balades Sonores is not a record store like any other. Inside, you’ll find an ever-growing collection of CDs, vinyls, DVDs, and cassettes along with books on music and handmade clothing and accessories created by the artist Chicamancha. Extremely active in the Paris music scene, Toma, Chicamancha and their team also run a label, organize concerts, host showcases, events and exhibits in the store, put up posters all over the city, & distribute flyers at all the concerts and festivals in Paris and throughout France…Take a moment to get to know these two passionate creatives below!

HOW WOULD YOU DESCRIBE THE MUSICAL IDENTITY OF BALADES SONORES?

Though La Fabrique Balades Sonores started out geared toward indie music, pop and rock, we now offer electronic music, soundtracks, world music, jazz, soul, funk, disco and hip-hop as well. The new generation is more open than when we were young, and you can see that in the store. Our customers’ selections are super eclectic and people tend to be proud of their varied tastes.

You started out with one store, then two…Are you about to take over the whole block?

Not any time soon! The opportunity to take over the space next to our original shop was just really good luck. We quickly ran out of space in our first store, so being able to have two spaces right next to each other was ideal, but now we need time to settle in to the new set-up. Having two stores means twice the costs, twice the rent, twice the personnel, and twice the work.

What is the relationship between the two worlds of Boutique Sonores: the record store and the graphics and textiles of Chicamancha?

The two worlds coexist very naturally—we never thought of creating a concept store in an opportunistic way. The relationship between Balades Sonores and Chicamancha started with a love story. Chicamancha is a real lady of all trades, so her creativity isn’t limited to what she does with Balades Sonores. For a while now, she’s also been producing stop-motion videos to advertise Record Store Day or other sales throughout the year. And the two worlds also complement each other at festivals, where Chicamancha sells what she’s made. Chicamancha’s tote bags definitely come in handy for carrying the records you’ve just bought! We get a lot of requests from graphic designers who like our concept and want to collaborate, but we have to say no because when it comes to design, we’ve already got everything we need! 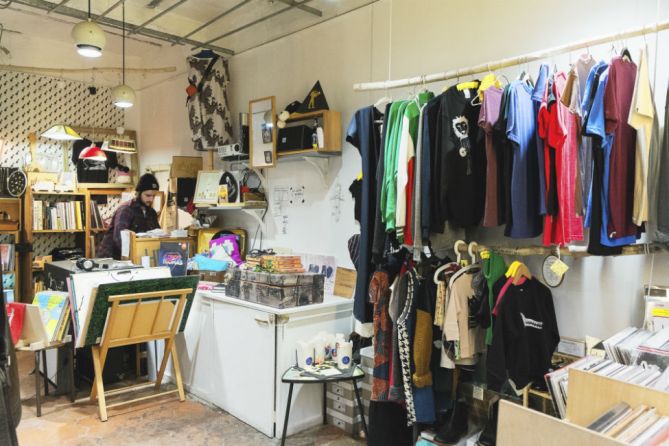 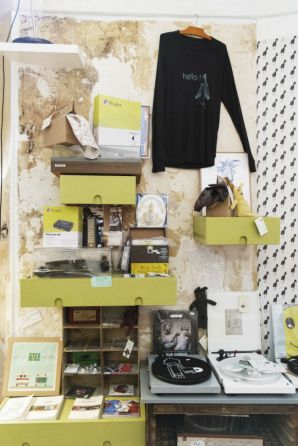 Tell us about Bittersweet(paradise), the festival you organize every July.

The festival is kind of like us: friendly, eclectic and accessible. The events are free or donation-based. And since we like the idea of wandering around, the events take place in a different space each day. We tend toward concert venues and outdoor spaces, like the square d’Anvers, right across from our stores, the patio at the Petit Bain, the Glazart’s fake beach, and other unusual and ephemeral spaces like Ground Control last summer. Since the first edition of Bittersweet(paradise) in July 2010, the festival has taken on a new form every year: the number of days and number of bands are never fixed. It all depends on what we feel up to, our budget, and how much time we have, which bands we’ve worked with that year, and the opportunities available to us. Since running the two stores takes up a lot of our time, this year’s festival will probably be similar to the one last year, taking place over four or five days with about thirty bands booked.

How would you describe the current music scene?

It’s pretty positive! Thanks to the internet, we’re seeing a great mix of styles, and a lot of walls are coming down for both listeners and musicians. Bands like These New Puritans, Animal Collective, or entire music scenes like the English-influenced electronic music in Porto (Kuduro), foster a real melting pot of styles and cultures. In recent years, there are also a lot of forgotten albums resurfacing: things like world music or obscure folk. Both online and in the store, people seem to be celebrating diversity. There’s a never-ending well of music out there. It’s very exciting to be able to never stop discovering new sounds.

In France, things are changing too. For example, French bands are going back to singing in their own language. Ten years ago, it wasn’t cool to sing in French, and now it’s the opposite.

How does your work influence the music scene in Paris and in France overall?

I don’t think we influence anything. We’re just one small part of the rich, eclectic scene here. But we did support a lot of fledgling bands when they started out, some of which have gained some notoriety. A few examples are Aline, La Féline, Mina Tindle, Exsonvaldes, and more recently, Ropoporose and Gontard!. With five showcases per month over the past four years, more than 250 bands have played in our store. Our objective is to keep supporting new talent while also reflecting the activity of all the different scenes and musical styles out there. Our label can attest to that. We’ve helped various labels release three very different projects on vinyl: from the garage noise of Tropical Horses to the erudite French pop of La Féline, or the Russian songs collected by Vincent Moon.

Tell us about your favorite concert.

We were blown away by the concerts of Son Of (a project that rose from the ashes of Jack the Ripper). It’s a complex and uncertain band, which is why we were pretty much the only ones brave enough to invite them to play. The Deerhoof concert at Nouveau Casino in 2010 for the Bittersweet(paradise) festival also holds a special place in our memories. Besides the fact that they’re foreign, Deerhoof is also the most famous band we’ve had play, and they happen to be one of our personal favorites.

Do you have any upcoming projects?

In the short term, we want to have a successful Record Store Day the weekend of April 16th. After that, we want to plan for our summer festival. And in the long term, we just want to be able to keep doing what we do while always maintaining our thirst for more music!

Check out the playlist that La Fabrique Balades Sonores curated for Indie Guides: