Mini Guide: 5 Spots to Check Out in Toronto

With half its population made up of immigrants, it’s no wonder Toronto has earned a reputation as “the most multicultural city in the world”. This great melting pot is what gives Toronto its unique effervescence, and just like their city, these little shops have made diversity their forte.

Kid Icarus: Stencils at the ready 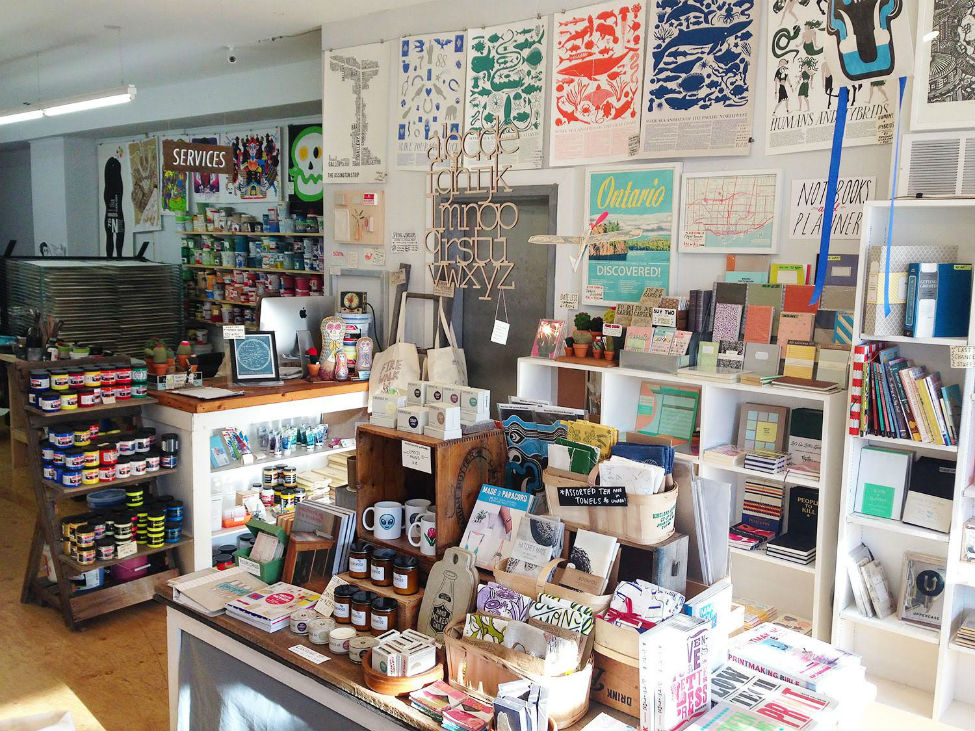 The screen print studio and shop Kid Icarus is the brainchild of couple Michael Viglione and Bianca Bickmore. Professional designer Bianca is constantly coming up with new designs while Michael, master screen printer, works away at his machines (some of which are more modern than others).
Over time (they opened their first store in 2007 on Nassau Street in Kensington Market) the couple began to work with other, mostly local, designers. Greeting cards, calendars, wedding invitations – everything is printed in the studio under the supervision of Michael. Each year, Kid Icarus prints hundreds of limited-edition concert posters. On the walls you can find examples of such posters that were made for The XX and Ariane Moffatt. Posters for the Polaris Music Prize are also printed here, as are those for local festivals such as Field trip. The shop, located opposite the studio, sells stationary, greeting cards, books and a selection of posters. And, as if all that weren’t enough, Michael also offers workshops where participants can learn the art of screen printing themselves.

Rotate This: A favorite among music lovers 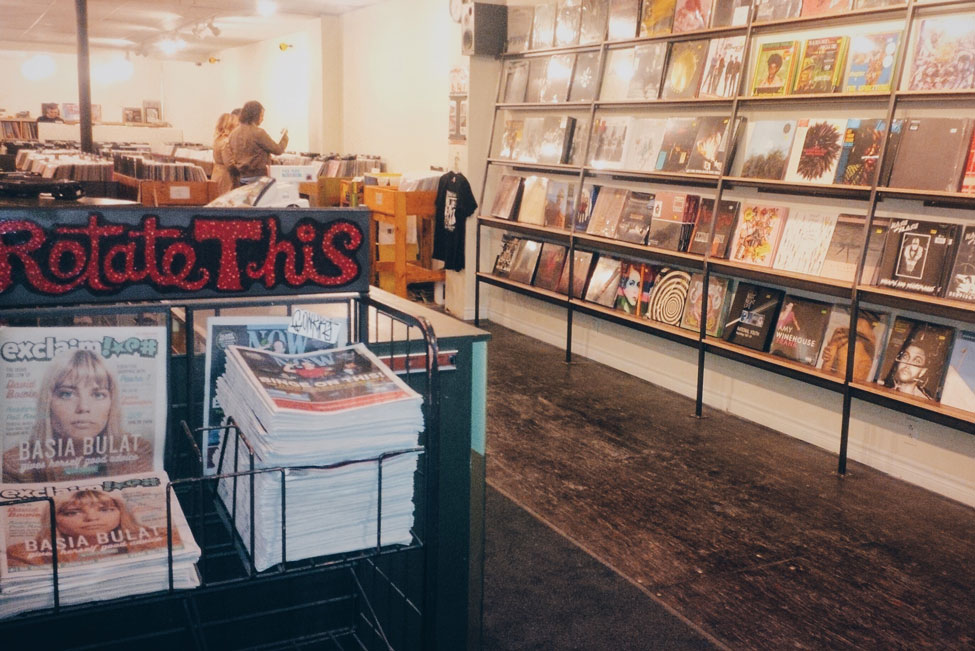 Record store Rotate This has been a popular haunt for Toronto’s music lovers for over 20 years. Owner Pierre Hallett took the decision to open the store in 1991 as, at that time, it was very difficult to get your hands on vinyl records. Today, record stores are popping up everywhere – yet Rotate This is still going strong. Music fans flock here to buy albums old and new and to pick up concert tickets, as the shop serves as a box office for most of the city’s indie and alternative gigs. The list of tickets on sale is regularly updated on the website. Pierre is a music connoisseur himself, yet he doesn’t really favor any genre in particular. “I just like things that are done well,” he explains with a smile.
In February 2016, after Rotate This had been a familiar part of the landscape on Queen Street West for over 20 years, Pierre made a bold decision: Queen Street West had become “too proper” and no longer fitted with the customers’ image of the store, so he relocated a few blocks west to Ossington Avenue. 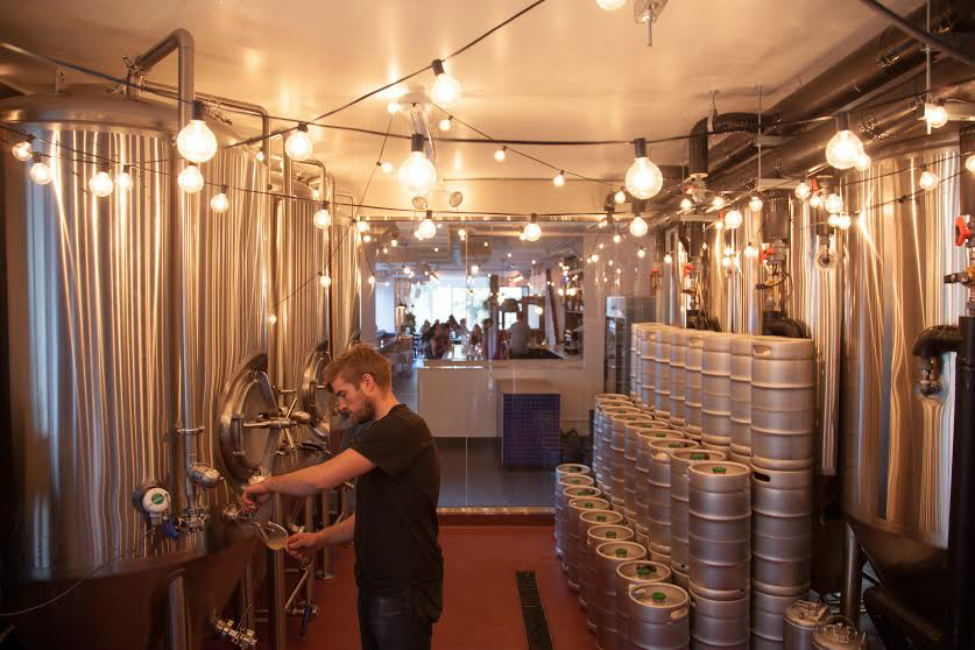 The owners of Burdock make no effort to hide their inspiration: After spending a few years in Montreal, they decided they wanted to launch a bar/restaurant/gig venue in Toronto similar to Casa del Popolo – the popular concert venue on Montreal’s Saint-Laurent Boulevard. So when they opened this venue on Bloor St. West, they already new it was a winning formula. The small venue is perfect for intimate gigs, as it can only accommodate around 100 people. The varied line-up is predominantly indie-based and curated by musician Charlotte Cornfield. The venue also organizes special musical events, such as its five-day piano festival.

As for the restaurant side of things, you’ll find talented saxophonist Jeremy Dennis in kitchen. The products used are locally sourced wherever possible. And the final string to their bow: Burdock is also a microbrewery. Every week, several beers are brewed on-site and can either be tried at the bar or bought by the bottle. Good beer, good grub, live music: what more could you want? 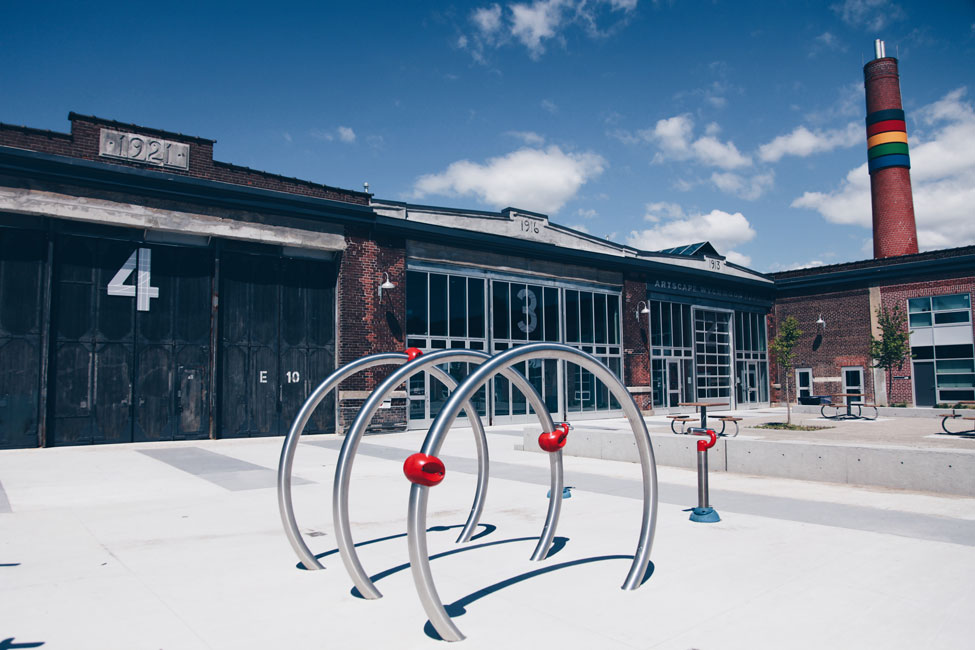 Situated north of Bloor Street, the Artscape Wychwood Barns are a haven for local artists and residents. The huge 5,500 m2 community space, which opened in November 2008, is housed in a brick hangar formerly owned by the Toronto Transit Commission (TTC). The five charming buildings that make up the complex are perfect examples of 20th century industrial architecture. Artscape, a non-profit organization dedicated to making space for creativity in the city, has uncovered the full potential of the location. Today, Barn 3 of the Artscape Wychwood Barns is home to about ten non-profit environmental and art organizations. Barn 1, known as the Studio Barn, is entirely dedicated to artists – some of whom even live in their studios. Barn 2 is a venue for events, including the Stop’s Farmers’ Market held every Saturday from 8 a.m. to 12:30 p.m. 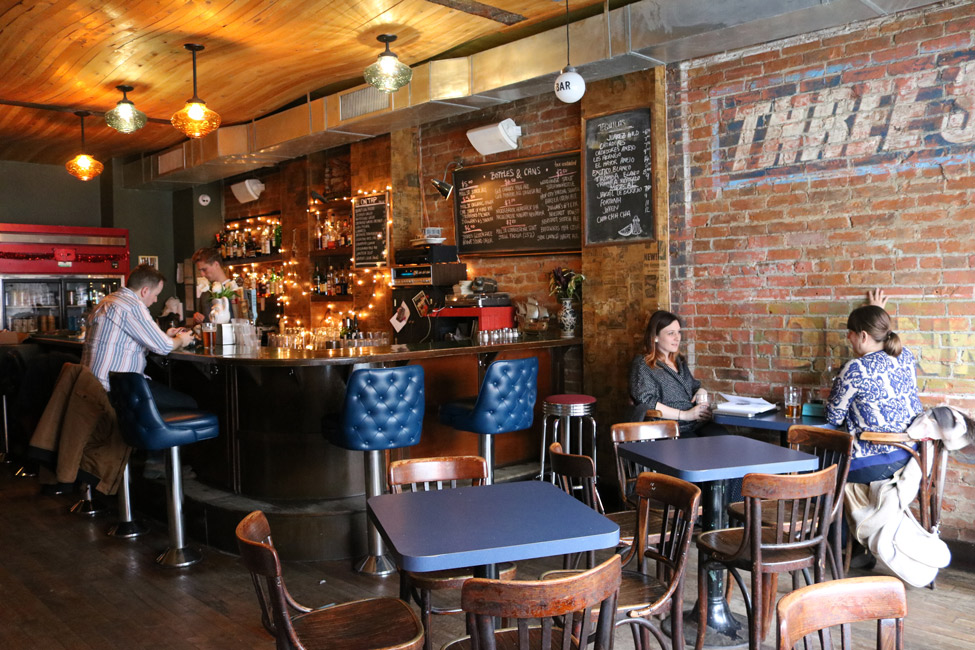 Do not be fooled by the name – 3 Speed is not a bicycle store. It is, in fact, a bar on Bloor St. West that opened in 2009 and took its name from a three-speed turntable. Most of the music is provided by the three owners themselves. These guys wanted to open a relaxed place, not too hip, where friends could meet to catch up over a drink and enjoy a plate of comfort food (i.e. a god mac ‘n’ cheese) all to an ambient indie soundtrack.
And they succeeded: The regular crowd is mostly made up of thirty-somethings living in Bloor West who have been waiting impatiently for a bar like this to open in their not-yet-up-and-coming neighborhood. All beers on tap are local, the kitchen is open until 11 p.m., the décor (exposed brick walls adorned with old newspaper clippings) is well thought-out, and their weekend brunch is delicious.

Photos: Courtesy of the places mentioned in the article
Discover more alternative and cultural spots in Toronto with our city guide Indie Guides Toronto.