Living in Greenland: An interview with Ivan R. Cuevas, a Spanish guy in the Arctic

When his girlfriend got the opportunity to go work at the Nuuk Hospital last year, author of Indie Guides Madrid Iván R. Cuevas didn’t have to think long before he decided to go with her… Maybe because he didn’t really know what was awaiting him there. He left Madrid for six months, far from the heat and hustle of his big city, to discover a world of cold and isolation.

Iván R. Cuevas works making TV programs for the Spanish cultural and educational TV channel TVE. So when his girlfriend told him about her job opportunity in Nuuk, Indie Guides Madrid’s author immediately thought about the new documentary he could film. He decided to brave Greenland’s weather and investigate how the education system functions in the most isolated place in the world. Now that he’s back in the country of tapas, we caught up with him so he could share some of his stories with us, humorously depicting the clash between a Mediterranean city boy and the Arctic.

I always considered myself a city boy, so it was a big challenge for me to move to the most isolated place in the world (Greenland has the lowest population density in the whole world). At the beginning I was mainly busy trying to stand up while walking on the slippery ice, but soon I started to fall victim to some kind of nature-induced version of the Stendhal Syndrome. Since they don’t have proper streets or recognizable city buildings, I spent some time trying to find out which of the buildings was the bar, the library, the church, the school or the local record store. Eventually you construct your own routine and you are able to enjoy the real Arctic life.

What surprised you most when you first arrived?

I should have been warned before, but the big, big, BIG amount of ice… Watching icebergs floating around from my place was also quite impressive. I was also immediately surprised by the lack of night time and the sun circling around my head 24 hours a day. Plus, the purity of the tap water really amazed me.

How did you communicate with the locals?

They speak Greenlandic (an Eskimo-Aleut language) there. Since they are still part of the Danish Kingdom, they also speak some Danish. When I first arrived I thought that Danish was the most difficult language on earth, but then I discovered Greenlandic! Luckily some people can speak good English and a fair amount of people can also speak Spanish, so I never had problems communicating.

How would you describe the cultural scene in Nuuk?

I found it a little bit like in The Simpson’s Springfield: they manage to have a little bit of everything. They have their local painter, the local artist, the local actor, one local museum, one theater, one cinema. Maybe all together these could compose something like a “scene” but I guess the first thing you need to create a scene is people, and there are just not people enough in Nuuk to achieve this. But I find it heroic the way they keep organizing little festivals, exhibitions, concerts and all kinds of regular cultural events. 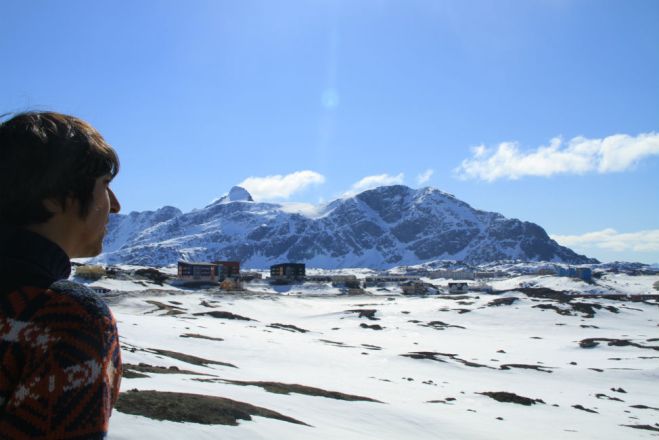 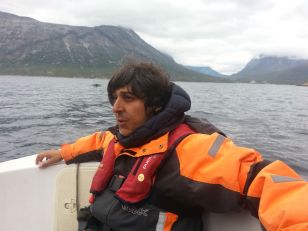 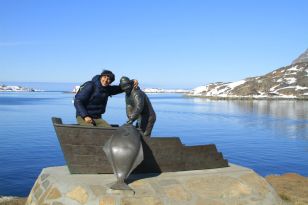 I divided my time into different segments:
– Writing and designing the documentary script
– Answering e-mails
– Visiting the library and use the only free Internet spot in town
– Fishing for cod in the fiord (I’m vegetarian… but you need to get a little bit wild when you’re in the North Pole)
– Reading the entirety of Proust’s In search of lost time
– Painting watercolors (I’ve learnt that you shouldn’t even try when it is below 0ºC)

How do the inhabitants occupy their time in December when there is only about four hours of light every day?

That is still a mystery to me… I wasn’t there during the hardcore wintertime. And remember that it is worse still in the northern settlements where the sea is frozen (no ships or boats are arriving or departing for six months) and they don’t see a single ray of sun for a considerable period of time.

Is alcoholism a real issue in the city?

Yes it is. It is true that you don’t see drunk people anywhere (mainly because if you pass out drunk in the street you could freeze to death), but they do have serious problems with the issue – especially among the lower social classes. They’re trying to tackle it, but it seems that apart from the crazy taxes on alcohol and the ban on selling it during certain hours and days, they aren’t coming up with any good solutions.

Did you join in with any muskox or caribou hunts?

I didn’t. As I told you, I’m vegetarian and I had enough with my morning fishing trips… I prefer to skip shooting mammals. But yes, it is the main national pastime. They go really crazy for it and on some days the city is empty because everybody is hunting in the fiord. 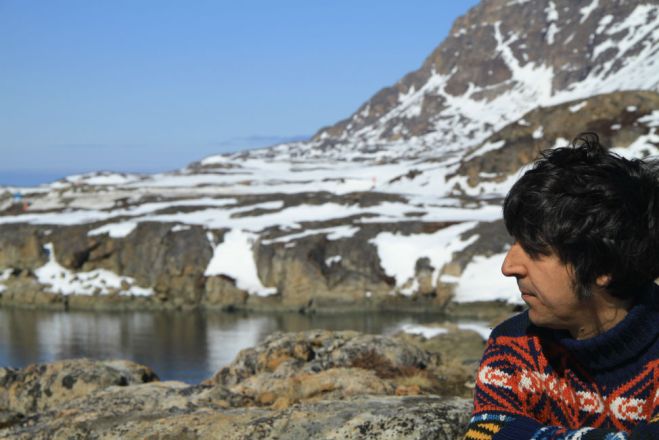 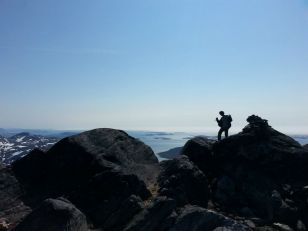 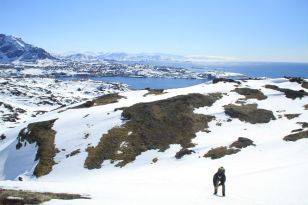 So did you eat a lot of fish?

More than I ever have before. Especially cod, halibut and redfish, but also shrimps and mussels. I made fish paella once… Maybe the most northern paella ever. I will check the Guinness Book of Records.

When was the time you felt the coldest?

One night camping in the fiord with my girlfriend. I closed my eyes and was worried that I might never open them again! I have to say that I’m a very Mediterranean kind of guy, so while I was thinking that I was going to die, my girlfriend was outside the tent quietly taking pictures of the northern lights.

Did you rub noses with Eskimos?

Hahaha. No… But I was naked a few times with them in a sauna, does that count?

Did you see polar bears?

No, they live in the northern part of the country. It is true that from time to time they turn up to chase some seals – it happened a couple of times while I was in Nuuk. These were skinny, lost and sick bears. But sadly the locals shot them and ate them. It is a “tradition” they say, and you wouldn’t dare argue with that – they are very stubborn on that issue.

Your documentary enabled you to discover the social situation of Greenland, especially the education system. How do kids get education in small villages?

It is very expensive to sustain the education in the little settlements where just two or three kids live. Usually they send the kids to the bigger villages when they don’t just quit. It seems that the Internet will bring new perspectives on this, but first they need to provide Internet to the whole country, which is still a big challenge. If you don’t believe me, just try to find the area on Google Maps.

Do you think that schools should be bilingual?

Absolutely. It is very important to keep the Greenlandic language alive, but you can’t forget that you live in a global world. Every new language opens up a new window on the world, and that means fresh air, ideas, and opportunities. I’m talking like my parents here… I’m getting old.

Why is there such a high rate of drop-outs?

They are trying to figure this out – isolation, no future perspectives, family issues related to alcoholism and child abuse, the cultural shock of Greenlandic kids encountering Danish higher education… It is a very complex situation with no easy solution.

Yes it is. As an example I can tell you that their Ministry of Education is actually the Ministry of Religious Affairs, Culture, Research and Education.

Now that you’ve tried it for us, do you think we should visit Nuuk?

If you have a lot of money (the airplane ticket alone is not affordable for every pocket), you love nature and you have a good resistance to cold weather, I totally recommend it to you. If not, don’t say that I didn’t warn you!

Ivan has selected a few songs to give us a glimpse of the music scene in Greenland. Don’t miss the DDR video!