In Paris, The Velvet Underground Has Still Got It

When it was released in 1967, the famous Velvet Underground banana album was not as successful as you might think. But if people couldn’t get down with Lou Reed and John Cale’s decadence at the time, the album has since seduced several generations of music lovers. Naturally, we headed straight to see The Velvet Underground – New York Extravaganza as soon as it opened. The exhibit is on display at the Philharmonie de Paris until August 21. Here are our impressions.

At the entrance, two giant screens divided into nine sections plunge you straight into 1960s America. There’s something mesmerizing about Jonathan Caouette’s arrangement of clips in black & white and color. Chaplin, ads for cigarettes and toothpaste, Kennedy, rollercoasters, the Beatles, and works by Warhol flash by in no particular order. The popular consumerist culture of the time is paraded relentlessly before your eyes. In the background, a voice recites Allen Ginsberg’s America. The text by the Beat generation’s front man stands in stark contrast to the videos playing on the screens, incarnating the counter-culture championed by the artists and intellectuals of Greenwich Village. The contrast takes you to the heart of the environment that gave birth to the Velvet Underground. Already, sounds emanating from the neighboring rooms meet your ears, and you can’t help but associate the aural discomfort with the complexity of the band’s music and the effervescence of post-war New York.

In the following rooms, the soft lighting and black walls recall the somber, somewhat insalubrious quality of the band (their name was taken from a book on the sexual subculture after all!). A video by Allan Rothschild retraces the childhoods of Lou and John up to the point when they met. A testimony by Lou’s sister, Merrill Reed Weiner, reveals details about Lou’s family, his love of literature, his antisocial behavior, drug use, and the defining silences and misunderstandings of his relationship with his parents. This shift into the intimate world of the two artists encourages a better understanding of their state of mind at the time, and the context within which the band evolved.

The big tripods scattered throughout the exhibit displaying cardboard cutouts of the band members and their entourage seem a bit superfluous to us. But in the archives at their feet, you’ll find a variety of rare pieces and hundreds of photos documenting their career. The photos were taken by friends and acquaintances of the band such as Nat Finkelstein or Gerard Malanga (does the whip dance ring a bell?). Lou Reed and John Cale are placed in the limelight, of course, along with rock-crazed guitarist/bassist Sterling Morrison and the androgynous tribal beat lover Moe Tucker. One room is dedicated to Nico, and the soft curve of the space contrasts with the sharp angles of the other rooms, much like her white frock distinguishes itself from the black clothing of the other members. You’ll also see other essential characters like Andy Warhol and Doug Yule, who replaced John Cale, along with Piero Heliczer, the first person to capture the legendary band on film, Barbara Rubin, who introduced the band to Warhol, and Edie Sedgwick, one of the superstars of the Warhol Factory and the muse behind Femme Fatale.

In the final room, you’ll find an installation breaking with typical exhibit conventions, likely the most memorable part of the visit. A cabana stands proudly in the middle of the room like a throne, taking up most of the area. Unsurprisingly, we find most of the sparse Tuesday afternoon visitors gathered here. The ground covered in pillows invites us into dreamy repose while the languid airs of the Velvet Underground float by. The lyrics are projected in writhing lines along the fabric roof, completing the experience. If the security guards hadn’t ushered us toward the door at closing time, we would have loved to spend the night in this time capsule far from the fuss of contemporary Paris.

Nico and Lou Reed at the Castle, Los Angeles, 1966 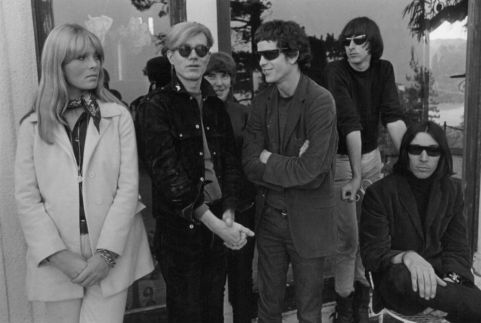 The exhibit manages to please both avid fans and neophytes without leaving the experts wanting more or going over anyone’s head. At its core, The Velvet Underground – New York Extravaganza is an apt reflection of the group itself: rich and complex, messy and impenetrable. It also feels a bit voyeuristic, considering Lou Reed’s tendency to be uncooperative with journalists and his revulsion for discussing his private life in interviews. But no need for him to turn over in his grave. Though the corner of the veil is lifted, the Velvet Underground still retains the aura of mystery that made it one of the New York underground’s greatest legends.